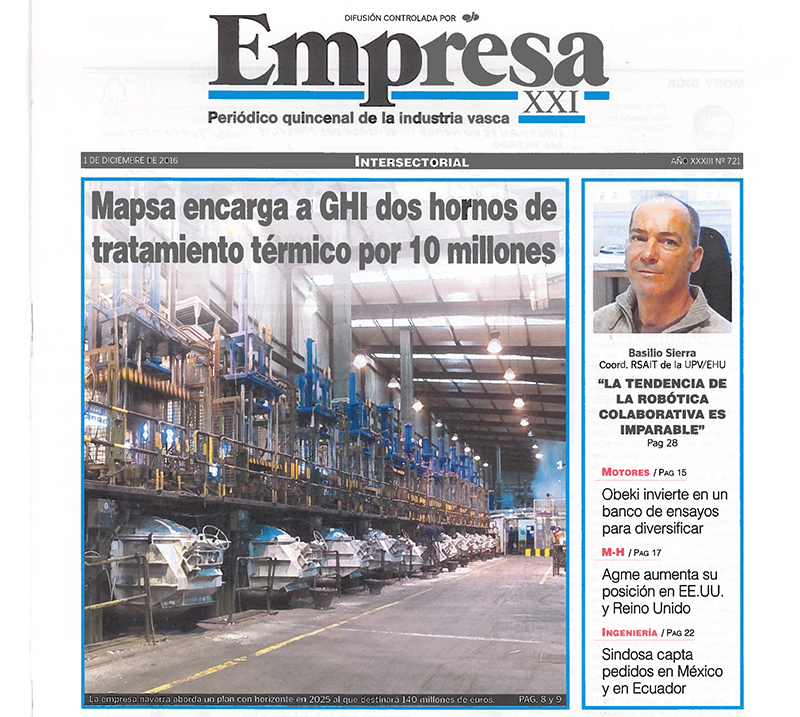 The Mondragón cooperative will invest 140 million euros between now and 2025 in expanding its plant in Orkoien, building a second plant, and R+D+i.

Car wheel rim manufacturer Mapsa has awarded Biscay company GHI Industrial Furnaces a contract worth 10 million euros for the manufacture of two heat treatment lines for installation in its Orkoien plant. This activity is part of an ambitious expansion plan in which 140 million euros will be invested by 2025.

Navarre-based company Mapsa, which manufactures aluminium alloy wheel rims for cars and is part of the Mondragón Corporation, has embarked on an ambitious industrial plan for increasing its production. This involves expansion of its Orkoien plant, construction of a second plant and R+D+i, with a 140 million euro investment budget for between now and 2025.

The cooperative, which has been in existence for 25 years and made sales to the value of 97.5 million euros in 2015, employs 500 staff.

The Orkoien plant’s manufacturing output for the end of 2016 will be 2.6 million wheel rims. Miguel Ugalde, Mapsa Manager, confirms that the goal is to be able to manufacture 3.5 million rims at full capacity by 2019, following investment of 30 million euros to expand the plant.

The main items of this investment up until 2019 are the purchase of automated, robotic machining cells; equipment for automatic analysis of rim internal structure using X-rays and artificial vision; technology for ensuring rim tightness using helium and mass spectrometry; casting cells with molten alloy pressure and temperature sensors; six automatic deburring stations; a third melting tower to generate more alloy; equipment to increase painting line capacity and two heat treatment lines which, by means of applying heat and cold, enable the metal structure of rims and their capacities to be modified.

Mapsa has awarded the Biscay company GHI Industrial Furnaces the 5 million euro contract for manufacturing the first heat treatment line. Although the contract for the second furnace has yet to be signed, Ugalde confirmed that it will also be manufactured by GHI. The cooperative itself and Navarre University have been involved in developing this equipment. It is the first of its type manufactured in Spain and, given its innovative nature, Mapsa hopes to obtain funding from the Regional Government of Navarre for its R+D+i activities.

Separately, start-up of the second plant will be voted on at the assembly of cooperative members due to be held in May 2017. The plant will be built in modules, to “accommodate commitments to customers and production increases”. There is a 100 million euro budget, of which 30 million are for the first phase, which should be operational by 2019. The plant should be fully completed by 2025.

This new installation forms a heat treatment line, which will be implemented followed by a second duplicate line with a view to increasing customer production capacity from 2.6 million rims to 3.5 million rims by 2019. This equipment is the first of its class to be manufactured in Spain and has a significant R+D element. It is a treatment line for solubilizing, tempering and ageing car wheel rims of different sizes and includes furnaces, a tempering tank and various items of auxiliary machinery.

The batch loads rest directly on the roller bed, thus avoiding heating material that cannot be processed, such as load baskets, and achieving better energy efficiency in the facilities. Rollers are arranged on four levels for optimum use of furnace length. The furnaces are arranged at different heights to make optimum use of the space for the installation inside the plant.

The main design requirements met by the line are: high output and reliability of the parts manufactured, fully traceable batch loads, good uniformity of heat treatment stages and full automation, both of automatic rim intake system and furnaces. 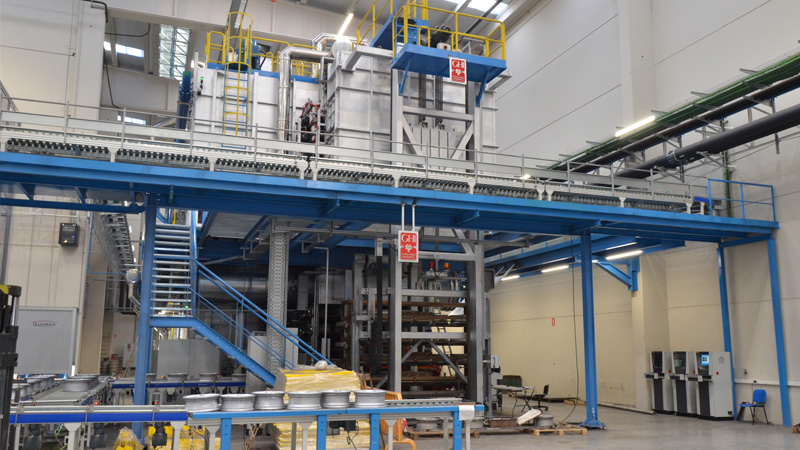 About the Ana Candela